Does lying on your back make you a better painter? 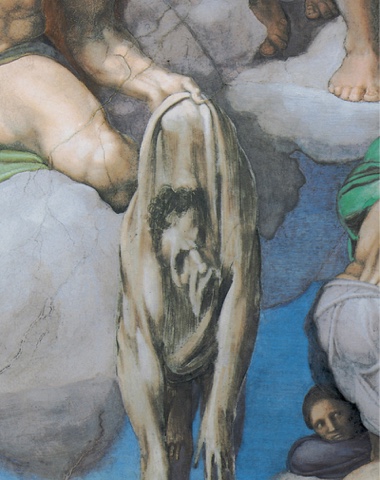 We all famously know that Michelangelo lay on his back to paint the magnificent Sistine Chapel. This has always intrigued me – how did he do that? As an Alexander Technique teacher it is appealing to think that he found some sort of blissful connection to his back, his lengthening and releasing spine, allowing his genius to pour out. Some kind of High Renaissance version of semi-supine, aka constructive rest, that allowed him to paint with ease.

As a painter I have always been dubious. It turns out that the fact that he lay on his back to paint is a myth. Michelangelo was not comfortable in his skin at all, as this fascinating poem shows and the Self Portrait as Skin also seems to reveal –

Michelangelo: To Giovanni da Pistoia
“When the Author Was Painting the Vault of the Sistine Chapel” 1509

I’ve already grown a goiter from this torture,
hunched up here like a cat in Lombardy
(or anywhere else where the stagnant water’s poison).
My stomach’s squashed under my chin, my beard’s
pointing at heaven, my brain’s crushed in a casket,
my breast twists like a harpy’s. My brush,
above me all the time, dribbles paint
so my face makes a fine floor for droppings!

My haunches are grinding into my guts,
my poor ass strains to work as a counterweight,
every gesture I make is blind and aimless.
My skin hangs loose below me, my spine’s
all knotted from folding over itself.
I’m bent taut as a Syrian bow.

Because I’m stuck like this, my thoughts
are crazy, perfidious tripe:
anyone shoots badly through a crooked blowpipe.

My painting is dead.
Defend it for me, Giovanni, protect my honor.
I am not in the right place—I am not a painter.

Michaelangelo describes in great detail the physical discomfort he was in, not lying on his back but squashed into a crazy distortion to do the work. It really does make more sense that he had to contort himself to create such an extraordinary feat on a ceiling.

He says being physically stuck is affecting his thoughts, that he doesn’t feel right, that he has lost his confidence as a painter – ‘anyone shoots badly through a crooked blowpipe.’

I find this utterly fascinating and can relate to the lack of confidence that comes from being or feeing ‘screwed up!’ Simply put slumping and holding tension in the body effects the thinking processes and emotions.

Pyscho-physical unity of poise leads to more confidence and better thinking, as Michelangelo says – being in a bent  stuck body leads to thinking that is ‘crazy, perdifious tripe!’

Learning Alexander Technique certainly released my creativity. During my training with the late Don Burton I would regularly go into the movement studio in an evening and paint and paint filling the walls with artwork overnight.  The art had started to flow as the Alexander work released my ‘knotted and folded’ self.

I would suggest that anyone interested in developing their own creative process would do well to learn some Alexander Technique ‘Body Magic’ and lie on the floor and use the thinking like a magic paint brush. Learn to paint your own anatomy from the inside – exploring the shapes and contours, landscapes and places of your body with your mind to free into your unique creativity.

So does lying on your back makes you a better painter?

When I first came up with the blog idea title it made me titter in a very silly British humour kind of way! However, thinking about the question and discovering the poem by Michelangelo, I think it is a really useful question for painters and other creatives to think about. Maybe we don’t have the extraordinary genius and talent of Michaelangelo, but we can learn from him and recognise the truth in his words that being ‘stuck’ (tense, slumped, held, in pain, sore, physically contorted and out of balance) really does affect our thinking and our creativity and leave you, as he says, ‘not in the right place.’ 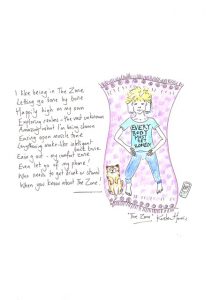 Lying in semi supine to free up your creativity …

If you feel ‘a crooked blowpipe’ here is a link to a media download, BODY MAGIC, to be listened to lying down for you to work with  – CLICK HERE

‘The Hallmarks of the Alexander Technique are creativity, spontaneity and adaptability to change.’ A.R. Alexander 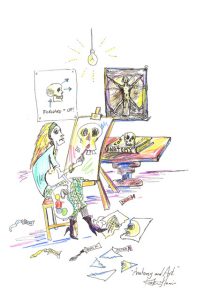 (Me screwed up at art school!)