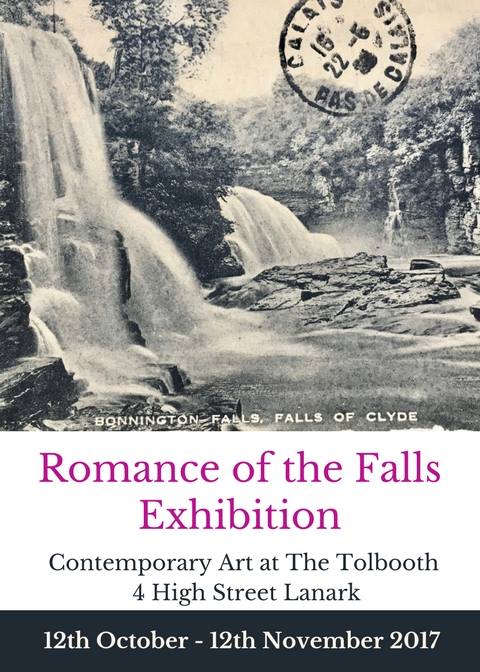 During the Napoleonic Wars when Europe was closed for The Grand Tour, The Falls of Clyde at Lanark became a ‘must visit’ place on what became known as Le Petit Tour.

Determined to continue the Romantic tradition, Romance of the Falls is an eclectic, exciting group contemporary art exhibition at the newly refurbished historic Tollbooth in Lanark’s High Street, opening on the 12 October for a month.

Following in the the footsteps of JMW Turner, Jacob More, The Wordsworth, Samuel Taylor Coleridge, Sir Walter Scott to name a few of the greats who have drawn inspiration from this spectacular scenery over the past centuries, a collection of artists are once again being inspired by The Falls of Clyde which have been flowing at full power all summer. It was the building of the hydro electric power station in the 1920’s that caused the Falls of Clyde to fall off the art map! (See before and after photos at end of this post).

Painters, sculptors, steam punk makers, furniture creators, illustrators, glass workers, jewellers, textile artists and a film maker exhibit side by side in this powerful exhibition, each interpreting the theme of Romance of the Falls in their own style, ranging from wildlife to landscape, abstraction to surrealism.

A percentage of sales from the art will go to the Tolbooth to continue their exciting refurbishment work, bringing this fifteenth century former prison into an exhibition and event space with wow factor. The next phase is refurbishing the magnificent high ceiling upstairs room.

Art work will be exhibited on both floors during this show.

Come and see what amazing artistic talent there is in the area!

The Falls of Clyde by JMW Turner

Two photos of the same view at Bonnington Linn.

Firstly as Turner and the Romantic artists and writers saw it and the second with the hydro electric diverting it’s power most of the time these days.

Above the left hand waterfall is a little iron bridge, now uncrossable, that led to the island in the middle of the falls and a folly temple. It must have been so exciting to cross the fall with it’s 30 ft drop.

Remains of the ‘Hall of Mirrors’ opposite Corra Linn.

Mirrors gave visitors the feeling that they were standing inside the waterfall.

Now under threat of collapse from development work at the hydro electric sub station. 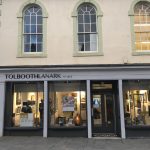 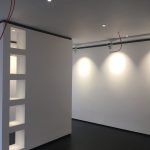 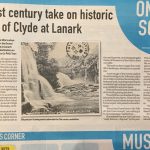 Press in the Lanark Gazette

blog Bonnington Linn, Romance of the Falls Exhibition, the falls of clyde, The Hall of Mirrors