Reflections on Plagiarism, Stress, Tattoos & the Kindness of Strangers!

If turnips were watches, I’d wear one by my side

There would be no work for tinkers hands!

Watch!  Some ‘turnips’ have no integrity or pride

They’ll plagiarise your concept, pass it off as their own hand

Tinkering with someone’s art is theft! Could it be banned! 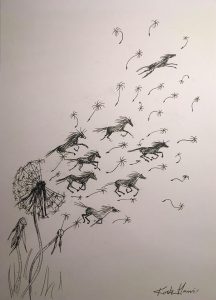 “If Wishes Were Horses’ by Kirsten Harris

I will admit I have had a stress headache that has gripped my whole back and also felt awash with cortisol the last few days. I don’t suffer from headaches but I do know the cause. Someone has plagiarised my work and is selling it as their own in the form of t-shirts.

My first response to finding out was to have a glass of wine and go to bed saying to my ‘higher self’ – I will know what to do in the morning. Morning came and the thought was to rewrite the original verse. I didn’t want to go into a fear rant nor did I want to ignore it, so writing a poem appealed to my creativity whilst figuring out how to deal with it.

The plagiarised design concept is one I called ‘If Wishes Were Horses’ a dandelion clock releasing horses into the wind. For some reason this concept spoke to people and it went viral from my Facebook art page on 16th February 2018, the day I drew and posted it. That one post being shared organically 661 times with 91,169 people reached. Suddenly I was connected to loads of amazing people worldwide, and despite being snowed in alone for 6 days was having a great time.

On Friday I posted the verse rewrite on my Kirsten Harris Art page and this resulted in me getting the support I needed to work out what to do. I wrote to the company and they took the offending plagiarised t shirt off their website that day on the basis that it infringed my intellectual property rights.

My back released immediately, the headache lifted!

It was quite a startling feeling of energetic flow whooshing through me! Justice and right action resulting in total instant physical release! Woo Hoo! I was happy!

I posted on my page saying thank you and the support I received over the weekend has been amazing and I am so honoured to have so many fantastic people behind me. It means a LOT!

Last night three people messaged me to say the plagiarised work is being promoted again. I have written to the company again! Again I feel stressed! I feel the fear and tension gripping me again. I DO NOT want to live a life of fear and fight! I want to get on and be creative, be myself, and follow the creative flow of ideas and work to allow art to keep pouring through me. I do not want to be thrown off my path or sidetracked by this. So this blog is my way of letting go this morning.

People think I am either lucky or mad being an artist, but it’s not a choice. I have to paint for my own well being. It is something that chose me and not the other way round. I know other creatives understand this. It is not meant to sound pretentious. In some ways it is a bit of a curse, but of course a blessing too. Like all things light and dark is always there. (Chiaroscuro is the arty term!)

During the weekend I started painting a canvas about Walking One’s Own Path and having the courage to do so. It is a big painting 100cm x 150 cm and not finished yet, but part of the series of ideas that I drew in February as ideas for paintings. These are available as prints from my website, and again it was the amazing people on my page who encouraged me to do this.  Hopefully I will finish the painting in next couple of days as well as mentally resolve this issue!

Working on it all weekend has been a vehicle to work out some of this crappy fear stuff. It is work in progress …

My paintings are journeys. They have meaning. For years I have attempted to find a way to start describing my thoughts about Alexander Technique, my other passion, and the mysteries of being alive through painting. I feel that my work is going well, I have been at it for years, so am so glad to be feeling this way. I don’t want to be thrown off course by plagiarism.

Several people have had  ‘If Wishes Were Horses’ image tattooed on them over the past months. I have received letters telling me how they have hunted for years to find an image to commemorate lost love and this image is THE ONE.

Someone wanting to permanently own my work on their body is a huge compliment. I have no issue with this. I feel it has brought friends into my life and I never in a million years thought I would be a tattoo designer so it makes me grin. I feel honoured.

However to rip me off for commercial gain is frustrating as f**k!

For me the image of the dandelion clock has meaning too, as I was photographing their ethereal forms when my mum phoned to say my dad had died. The drawings is part of my journey of letting go and that is probably why it has spoken to so many people. 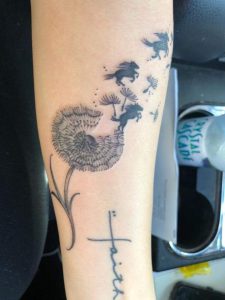 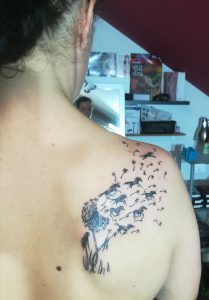 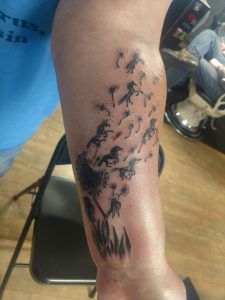 So it leaves me pondering does one sit in a tight huddle too scared to share one’s ideas with the world or to be brave and share? I know that getting the courage to share has moved me forward in so many ways that are good for both my art and soul.

So I want to let go and make art and not get bucked off my metaphorical horse by this!

However my back is tight again and I know that fear has got a bit of a grip again for now. I will be doing lots of semi supine over the next few days and hopefully keep finding creative solutions to get through this.

So while some people plagiarise, other strangers have been unbelievable supportive! I choose to focus on the positive energy. Or as us Brits say ‘Don’t let the bastards grind you down!’

The fantastic people on my page are encouraging me to make my own products. Maybe it is time …. am going to see if I can figure out how to do it …

(I do not usually suffer from back ache and this particular back ache is definitely emotional/psychic, the sensation is a feeling of being stabbed in the back! Not all back pain is physical, it can come from many sources, but that’s another blog!) 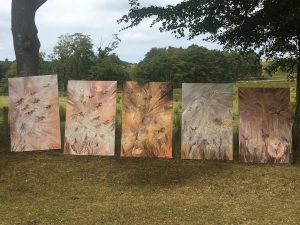 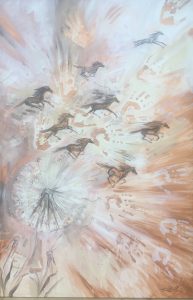 5 big oil paintings in this series