I Manifested a Castle! 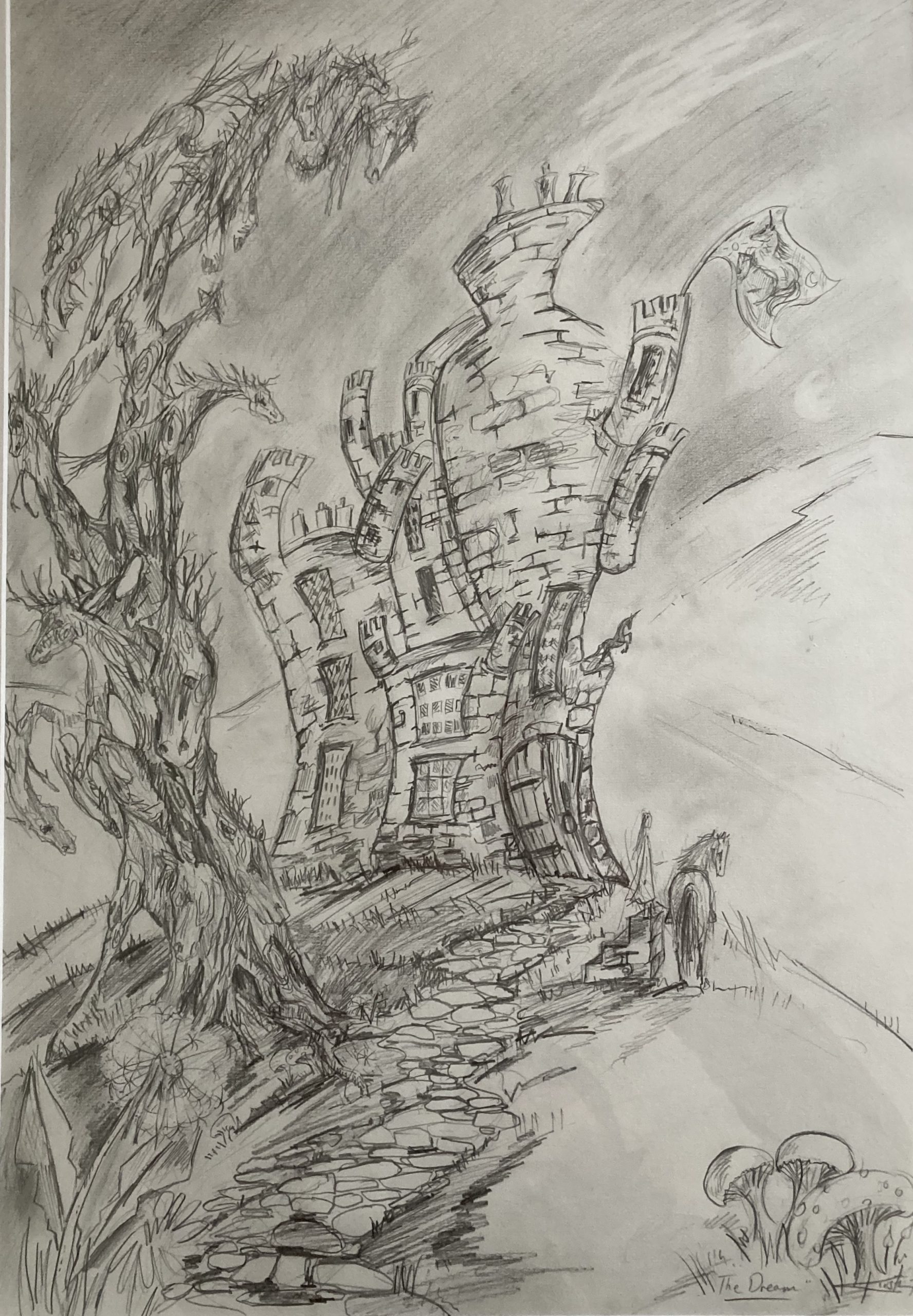 The Dream by Kirsten Harris, Pencil on Paper

In the winter I decided I would like to exhibit in a castle, as you do!

Several wintery evenings enjoyed sidetracked looking at castles here in Scotland and thinking how cool it would be to win the lottery and buy one, visualising how amazing I would make my castle look. As you do!

But guess what? There are no castles in my price bracket! Dah! So I decided to draw a castle instead!

‘The Dream’ depicts a girl standing on a mounting block beside her horse ready to ride up a mountain. She stands outside a turreted castle protected by her horse tree guardians. Distorted perspective and a ghost like girl suggests that this is the imagination at work, a parallel universe. A dandelion clock represents wishes fulfilled, the mushrooms represent altered states of consciousness. The unicorn on the flagpole says anything is possible, dreams are good, life is mysterious, forward and up!

Whilst drawing ‘The Dream’ I suddenly remembered seeing a post on Facebook months before that a local castle, Sheildhill, had been sold and would be reopening as a hotel at some time in the future. I scrolled Facebook until I found what I was looking for. Bingo!

I went for a nosy…

There were a couple of white vans parked outside. The downstairs windows were boarded up but there was a light on further inside, the front door was slightly ajar.

I tentatively pushed it open…

I could hear the sound of distant banging and ventured in. The place was a mess and obviously being renovated but ‘WOW COOL!’ A spiral stone staircase, dark panelling and a suit of armour. Walking hesitantly past another stairway, this time a grand sweeping one, obviously of a later period, I curiously peeked into some of the downstairs rooms…

This is perfect! Big walls!

I followed the sound deeper into the building and found two men with hammer and saw in the kitchen and mayhem everywhere. Full scale and big scale renovations were taking place. Amazing!

They directed me out through a dark passage into a garden where I found Mr Frame with a roaring chainsaw in hand lopping back a yew tree that was blocking a window and causing green mould on the stone.

Mr Frame, still wielding his chainsaw, listened to the daft explanation of my thought that it would be fun to exhibit in a castle as I had run out of space at home and had enough art to fill one, so I had made it a mission to manifest a castle by drawing one.

‘Yes… because my work is quirky!’ (Best compliment ever!)

I had manifested a castle to exhibit in! And then Covid 19 disrupted everyone!

At some point I am sure we will be celebrating the grand reopening of the hotel. It should have been in April 2020.

Do email me to find out more.