Nineteen Corvids, Unicorns and The Tree of Life 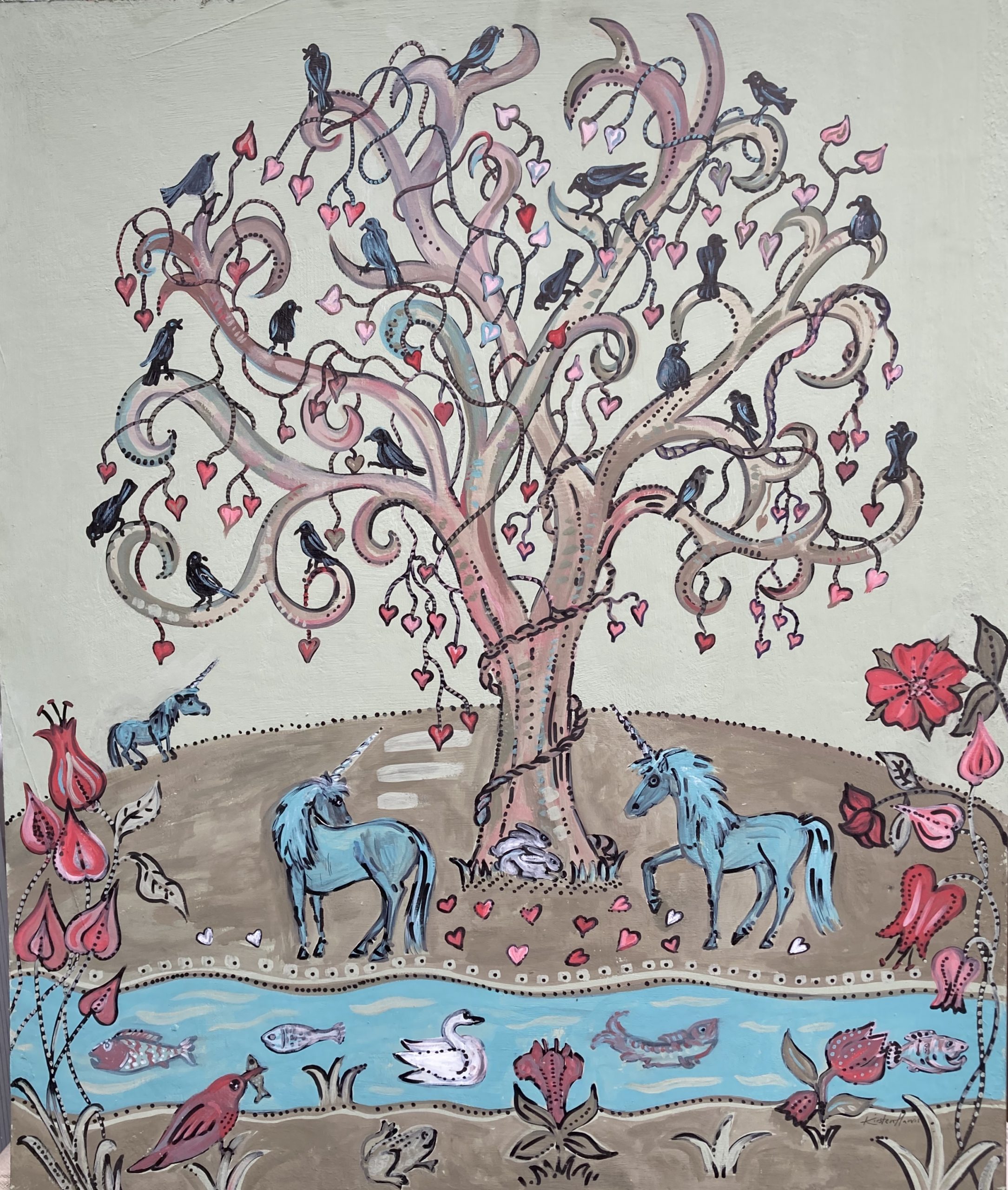 Corvid is the family name the crow belongs to. The crow not only symbolises death but also intelligence and destiny. I wanted to make some art to mark Covid 19. The Crow became my image. In numerology 19 becomes the number 1 which symbolises new beginnings.

The nineteen crows in the drawing aim to suggest peoples different experiences of lockdown, the rainbow coloured leaves hope and new growth. At the centre of the drawing is our local hill, Tinto – mountains to climb, the birds eye view. The dandelion seeds represent wishes and dreams, but also the spread of the virus and ideas.

The majority of the drawing depicts empty skies. Hardly a plane flying, hardly a car, just the sound of the wind and the birds. A space, a chance to breathe…

The second version of Nineteen Corvids is inspired by Medieval art, which I thought was apt as the Medieval era was a time of plagues and pestilence.

The Tree of Life, the lungs of the planet, life so precious! Two rabbits cuddle at its base. A vine of love wraps round the tree. Can we transform destruction to love and growth?

The water of life flows, abundant with fish. A kingfisher and swan guard the precious water. The kingfisher is said to be the first bird to fly from Noah’s ark after the deluge and is considered a symbol of peace, promising prosperity and love. Swan represents our ability to retain grace. A beautiful and elegant bird yet incredibly powerful. The colour white represents purity and the frog cleanliness and healing.

And so the river of life flows on, flowers grow. Spring turns to summer…

The three unicorns remind that life is ultimately mysterious – birth, life, death. The unicorn, an ancient mythological horse is found in antiquity and is the symbol of Scotland, chosen as a beast powerful enough to stand up to the English lion.

In Medieval times the the unicorn was believed to heal sickness. The wild woodland unicorn could only ever be captured by a virgin. This myth is thought to represent the Virgin Mary and so some believed that the healing power of the unicorn and its association with miracles represented Christ.

Magical healing Alicorn powder made from the tusks of unicorns was sold in Europe as late as 1741! Unicorn horn (narwhale horn) was an extremely precious commodity.

It would be easy to laugh at this superstition if it wasn’t for the fact that the Chinese sickeningly still use rhinoceros horn for medicine. They might as well bite their own finger nails for all the good endangered rhino horn is going to do them!!!

Do email me if you would like to come to my upcoming castle exhibition here in South Lanarkshire in due course or join my blog to be kept in touch.