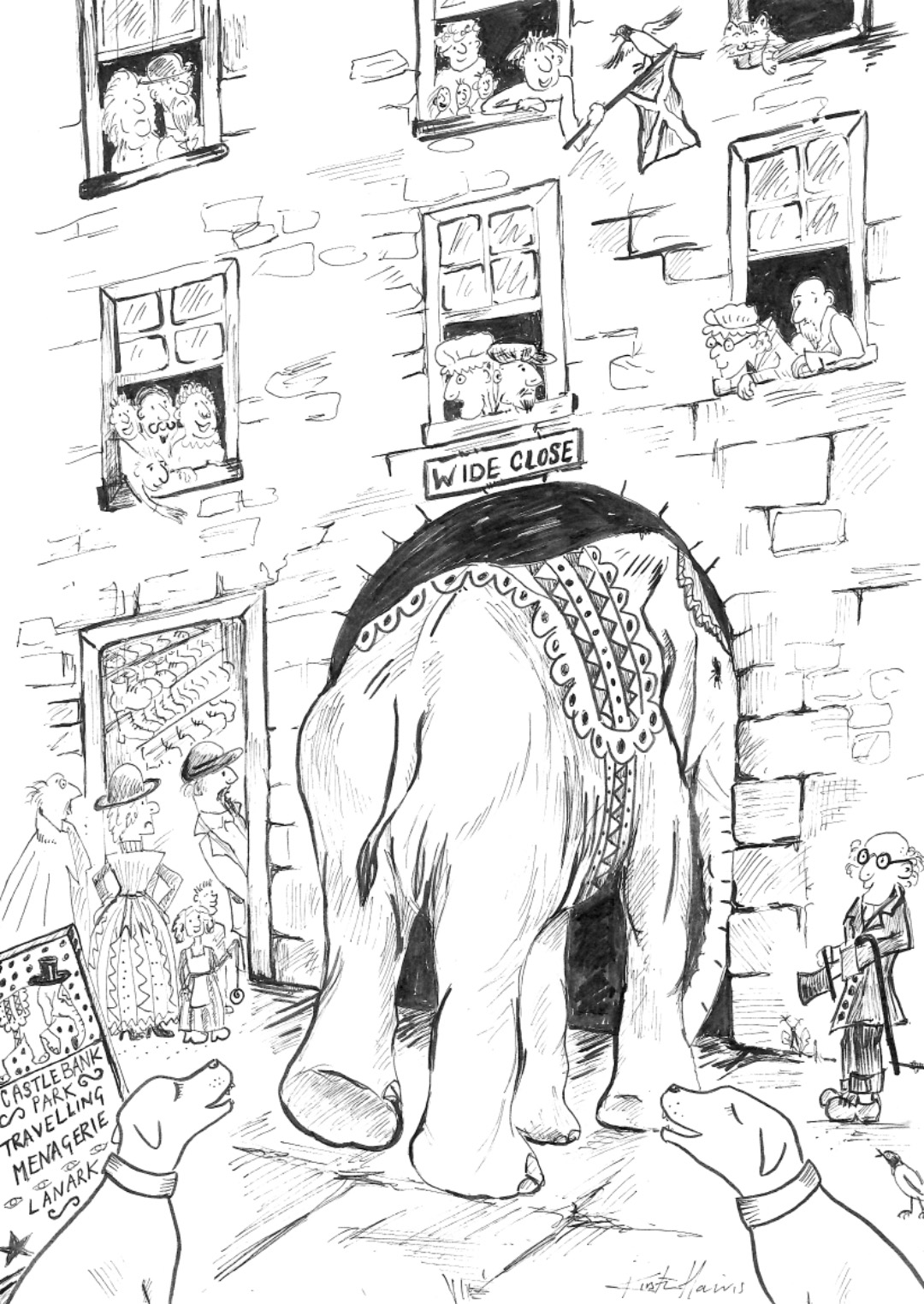 When I was asked to illustrate the history of Lanark’s Medieval Closes, for information panels to be displayed in the street, I was shocked, to say the least! I am definitely not known for images of buildings! Animals yes, dandelion clocks yes, horses yes, buildings, no! Perspective, Argh! ‘Steer clear’ has always been my motto!

I suggested another local artist but was told that she’d been asked and turned the job down saying she could draw buildings but felt she didn’t have the imagination to bring the history to life. So number 2 choice happily said ‘yes’! A job during lockdown and a challenge sounded more than fantastic!

It was obviously time to learn to draw buildings, take on perspective and create narratives. Sack the perfectionist, I decided, and create some comedy and fun to illuminate the history. A bit of possibly dodgy perspective wouldn’t matter and at least there was an elephant in one of the histories so I knew I would be able to do that!

The backside of the elephant was no problem having painted hundreds of elephants. I decided an elephants bum was funnier than a head poking out of the Close. Cartooning people in historically apt costume made me smile and wonder about the lives of folk in the past. So just a matter of some windows and an arch. Bingo!  First one done.

I realised this project was already a lesson to learn not to say ‘I can’t’ do something, ie draw buildings, just because I’ve never done it before! How often do we do that in life? Anyone relate? My mind and art were being opened wider by the Wide Close.

Wide Close was one of the gates to Lanark when it was a Medieval walled town and has a much bigger opening than any of the other Closes because of this.

So why an elephant in central Scotland? Here is the story from a book written in 1895 for anyone who plays the lottery or like me, loves elephants.

I haven’t rewritten it as the style it is written in is a lot of fun. I hope you enjoy the story.

Close Encounters opens 26th April at the Tolbooth Lanark. The original illustration are for sale with a certificate of authenticity. There are only 12 illustrations up for grabs and 12 paintings of the backs of the Closes by Ronnie Cruwys. Her paintings remind me of Van Gogh. Just fabulous! Poster below.

We look forward to seeing you at this celebration of a little bit of the history of the Royal Burgh of Lanark.