The Drama of Art 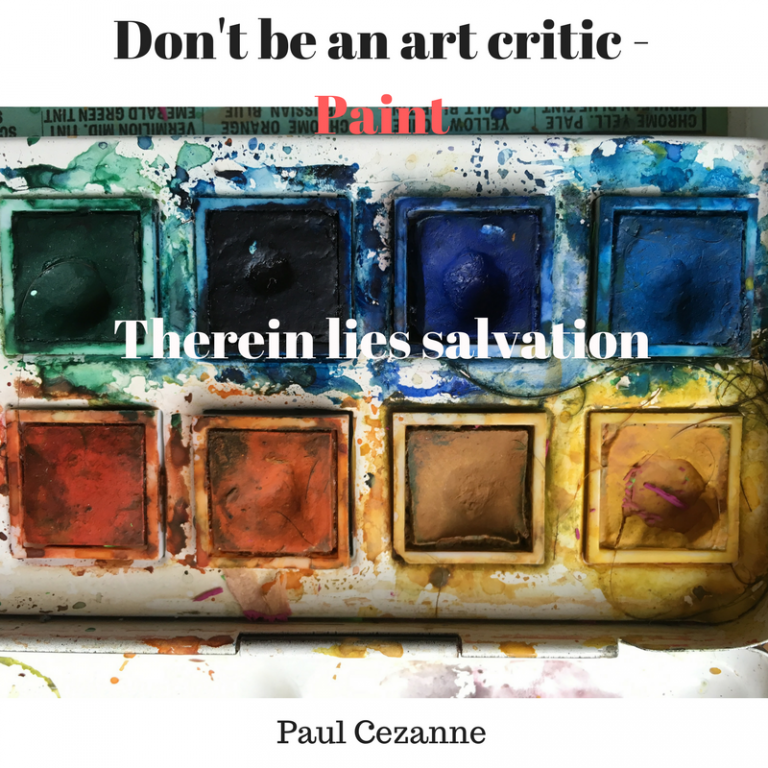 Recently a friend suggested I like drama …I do!

As Shakespeare put it  ‘All the world’s a stage and all the men and women merely players. They have their exits and their entrances and one man in his time plays many parts.’ (As You Like It)

I used to teach Alexander Technique to actors too – I loved that job and the drama students that I worked with.

So, guilty as charged, give me a good drama with great dialogue and I am happily entertained, especially if it has a joyful, illuminating or interesting ending.

Up until painting in the studio today, I have always seen myself as enthusiastic audience for stage or screen production. Today I recast myself as star of my own production – the drama of art.  Well why not … funny thoughts come to you when you are painting.

Today as I worked on a huge very colourful painting of a running cheetah that I started about 15 months ago and abandoned for as long, it came to me that being an artist really isn’t so different to being in theatre … creativity in all its forms is full of drama, pathos, tragedy, comedy, adventure, surprises …

As an artist you are of course the producer and director of your own scene aka a painting, but also the hero or villain of the piece depending on how it plays out.

Your painting can become a stage set for life in someone’s home.

A great painting invites you to look at it over and over and allows a dialogue of thoughts to unfold in the viewers mind over time. A great painting holds the viewer in front of it and even changes a persons breathing. Watch people at an exhibition – you will see it –  captured and entranced, the breathing deepens and slows, perhaps something akin to love.

Some paintings are like action movies, in production they unfold rapidly. It is exciting. The excitement and movement recognisable to the viewer.  Energy transmitted. When I am the producer of that kind of painting I can say that my direction has been clear. I knew exactly what I wanted, was organised and focussed. I allowed the painting to emerge and enjoyed myself hugely.  The painting itself becomes the hero of the action.

Other paintings are like soaps – they go on for months, sometimes years. I did some work on a painting that is at least ten years old today, it is still not finished. It is definitely a soap opera kind of painting – a creation scene with lots of animals swirling in a vortex.  These soap opera paintings teach you lessons about art along the way. These paintings are problems waiting to resolve. Every time you spend time at a soap opera painting you leave dissatisfied – oh well next episode I might find out what happens. You rarely do! But it is great fun making all those bits of story line –  painting over and over, reworking the same image in a slightly different way.

Other paintings are episodes in a long running series of paintings, complete stories in themselves but starring the same cast, for example Vincent Van Gogh’s sunflowers, Munch’s the scream series or Monet’s garden scenes.

And of course there are cartoons and animations. Simply narratives where anything can happen. The madder or more exaggerated the better. Drawings can be just a rough or scratchy stick person,  it doesn’t matter – just a  great idea played out.

Now to the villain – sometimes paintings are simply bad!

They have to be painted over, destroyed, abandoned, discarded. After you have tried to nurture, coax, reform and bargain with the painting and failed miserably several times, you only have one option – to just give up and put it down to experience.  Chucking away all that time can feel like failure.

So before you give up on a painting –  fight the good fight with all thy might –  with your sword – your pen, crayon, chalk or brush,  and use these paintings to make a right old mess of things. It is liberating and something interesting might happen!

Hope it helps thinking about art as a drama?

What dramas are you having with your creativity?