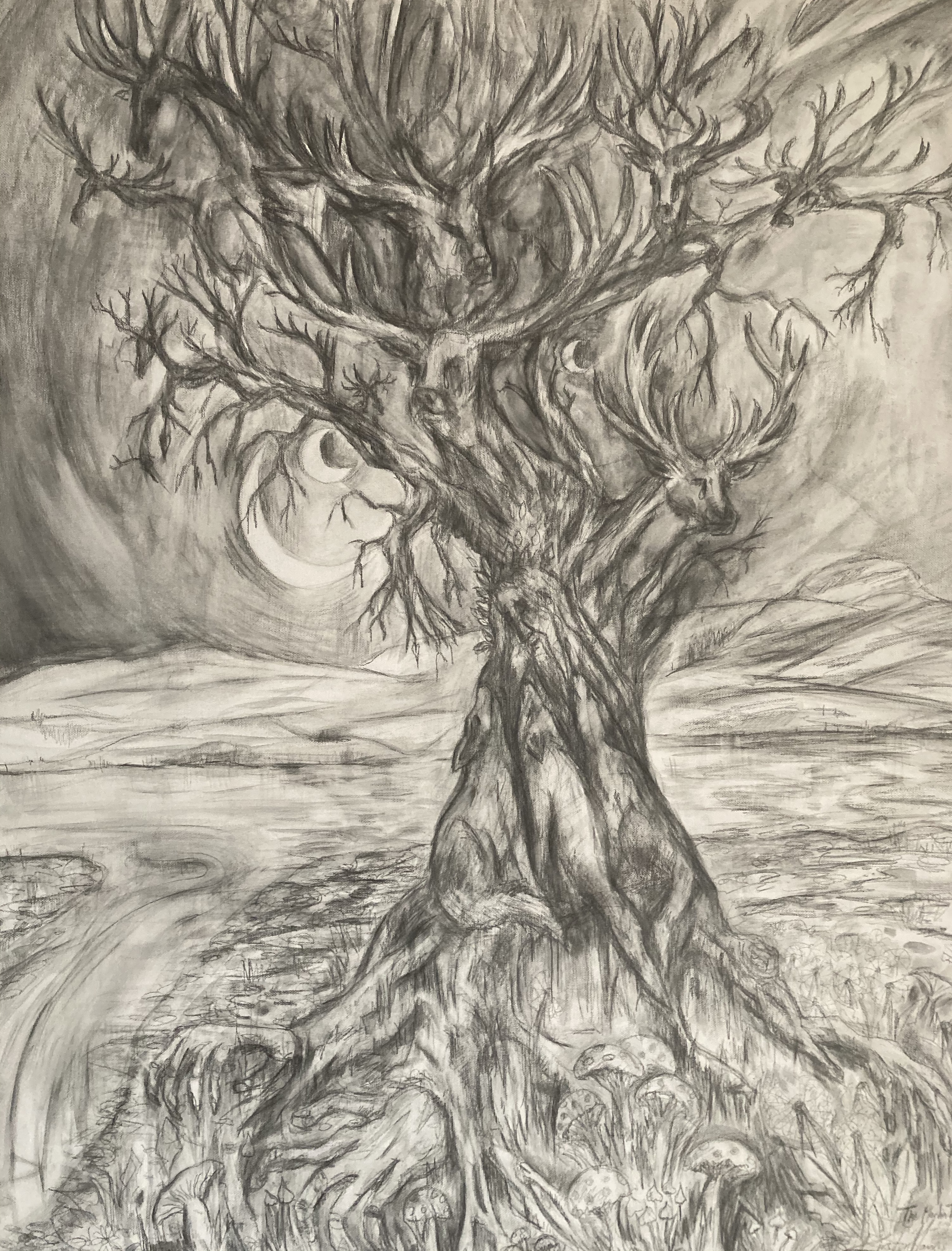 This drawing is based on the wizard Merlin’s connections with Scotland. Legend tells that Merlin died at a small settlement called Merlindale at Drumelzier near Broughton, not far from where I live. This drawing is inspired by a visit last year.

The three moons symbolise Merlin foretelling he would meet his end by threefold death – pierced by stake, suffering by stone and drowning by water.

Merlin is said to have died at the fork of the Powsail burn and the river Tweed, a beautiful magical place with a timeless atmosphere. An old thorn tree marks the spot, thus ‘The Merlin Tree.’ Certainly the name Merlindale appears on ancient maps, so who knows, maybe it is true.

Peering through the railings protecting the gnarled old tree, which replaces an earlier one blown down in a storm, it’s just possible to see a plaque, overgrown with nettles, commemorating Merlin’s death. I love the way Scotland, so rich in history, totally underplays such fabulous legends. You have to know how to find this place.

Tinnis Castle, an ancient hill fort, is in the background of the drawing. The story goes that Merlin fled from Tinnis before he was killed, having revealed a secret. I have used a bit of artistic license and relocated Tinnis geographically so it could be in the drawing, in reality it is behind the line of sight.

Three foxes form the trunk and deer make up its’s crown. These two animals are associated with the Merlin legend being the animals that Merlin is said to shape shift into. In Celtic mythology the fox represents quick thinking and wisdom as well as observing yourself and others whilst remaining unnoticed. The deer represents the gods of the forest and wild animals – the Celtic god, Cernunnos. Merlin was supposed to have spent many years wandering the forests of Scotland.

The wizard is also in the tree. The idea for this came walking in the fields behind my house when I spotted Merlin in a windswept beech tree and took the black and white photo below. I had walked past the tree hundreds of time and never noticed the figure.

The foxes look towards Merlin for wisdom. The roots of the the tree and his hands are one and the same, connecting with the earth. His hands reach towards fungi, pointing towards shamanic altered states of consciousness, and of course I had to draw some dandelion clocks to represent the whispers of legends down the centuries.

This artwork heralds a new technique for me, working pencil on canvas, which has an unexpected fluidity. I made this drawing at the beginning of lockdown, sitting on the floor surrounded by pencils. Luckily I had bought loads of pencils from the car boot sale a couple of weeks earlier for 50p! A pencil point lasted about 2 minutes drawing on the rough surface of canvas, so I sharpened about 50 pencils and after a couple of hours drawing, it was a boring half hour sharpening pencils again.