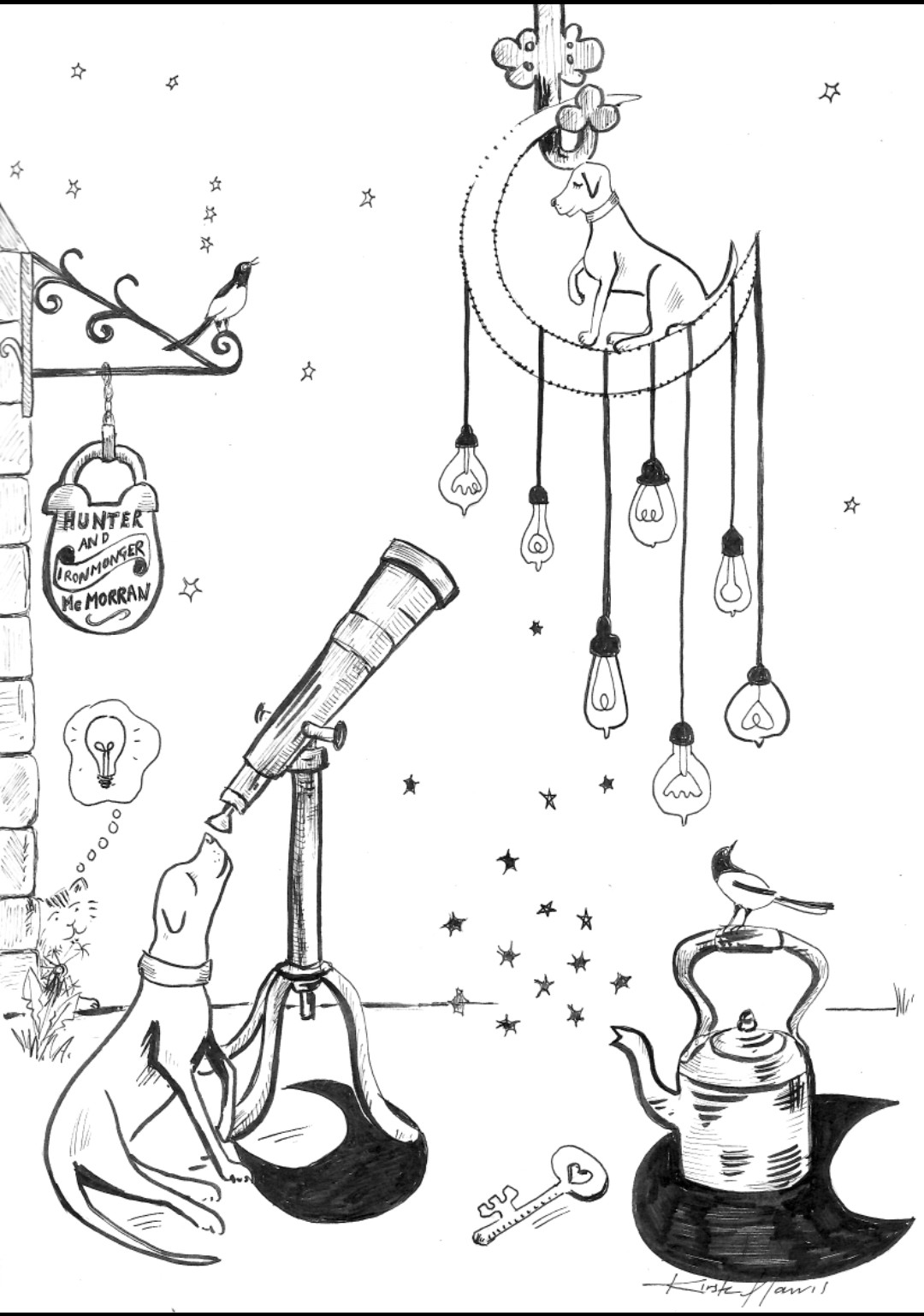 The illustrations for Lanark’s Closes house a veritable ark, with two dogs, two magpies, a cat, lion, unicorn, horse, several chickens and an elephant! But I wanted to add some less obvious details too.

Astronomy – The drawing for Hunter’s Close shows a telescope pointing at Orion’s Belt. David Hunter was not only the first person to install electrical lighting in his shop in Lanark but an enthusiastic astronomer he was commissioned by the Royal Observatory in Edinburgh to make a telescope.

Locating Orion’s Belt is the easiest way to find Orion, the hunter. I chose Orion as a pointer to Lanark’s coat of arms with its two hunting dogs when the Forests of Lanark were Royal hunting grounds.

Orion’s Belt is also known in British folklore as Jacob’s Rod, Peter’s Staff, The Golden Yard-arm, The Ell, the Yard Wand, Our Lady’s Wand, the Magi, the Three King’s, the Three Mary’s or simply the Three Stars.

Magic – The dandelion clock in each drawing symbolises wishes and hopes for the future. Who hasn’t blown on a dandelion clock and made a wish? I believe in the power of positive thinking and positive intentions. Mind magic! We create our own reality with our thinking. Or as Einstein famously said “The most important decision is life is to decide whether it is a friendly or hostile Universe!”

The saying ‘If Wishes Were Horses’ was first recorded in by James Carmichael by Tinto in the 1700’s. In several drawings a magpie holds a single seed, the seed of a good idea is indeed magical.

Alchemical Brews – Brewery Close led to Gilroy’s, The Brewers. I decided to add the formula for brewing, or how to make a potion, to the drawing in the hope that it might interest someone. Brewed dandelions are an incredible medicine for lots of things too! For those who like a more simple brew, the kettle’s on in Ritchie’s Close!

Superstition. Two magpies for joy appear in every drawing. Does anyone else say ‘Good morning Mr Magpie’ if they see a solitary magpie to counter ‘one for sorrow?’

The spider that appears in the window of McKenzies Close is not only a reference to the weaving industry but a money spider, creating abundance! One dead magpie lies on the floor, symbolising the demise of this once huge industry in Lanark.

Lucky horse shoes appear in the image for Duncan’s Close, which is also a reference to Riding the Marches every year during Lanimer week in order to retain Lanark’s Royal Burgh status. Duncan’s Close housed both smiths and stone masons. One dog has a paw on a March Stone showing the importance of the symbolic stone.

Close Encounters opens today at 10am at the Tolbooth Lanark. The twelve original drawings for the street history panels are for sale alongside drawings of the backs of the Closes by Ronnie Cruwys.