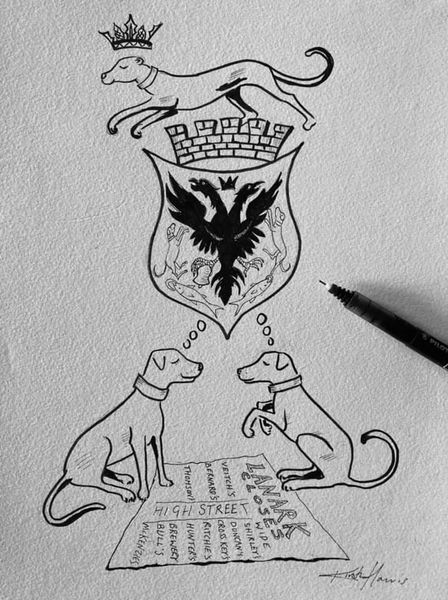 When I was asked to illustrate the history of Lanark’s Closes I was provided with some factual info about their past. I love history so found it interesting but also dry, as these things often are. I needed to find a way to give the information some life through illustrations that hopefully both children and adults would enjoy.

I began by looking at Lanark’s heraldic shield. Lanark is a Royal Burgh. On its 600 year old heraldry I noticed two dogs. Here was the start of an idea.

Lanark had been royal hunting grounds in Medieval times so this is why, I presume, the dogs are on the shield. I decided the dogs would appear in each cartoon providing a bit of fun and mischief but also linking into the long past of Lanark. Six hundred year old dogs were going to be given a new lease of life and turned into cartoon characters.

Now I had dogs I wanted a cat for cat lovers. Around the corner from the high street is the statue of ‘The Girnin’ Dug.’ The local story of neighbourhood feuds involves a cat chase, so here was my cat.

One idea was leading to another but now I had a cat I wanted two birds. I chose two magpies to symbolise ‘two for joy’ as I wanted the panels to be positive for the town. Lastly, I added a dandelion clock.

Much of my artwork over the past few years has been inspired by the saying ‘If Wishes Were Horses’, which was first recorded by James Carmichael in his book of Scottish proverbs in 1628. The Carmichael lands lie just outside Lanark by Tinto Hill, from where the Clydesdale Horse originates too.

So the dandelion clock acts a kind of signature of my artwork plus referencing more local history, as well as a positive symbol of hope, wishes coming true and transformation.

The dandelion clock too as a reminder of the huge importance of wildflowers as pollinators for bees. I sincerely hope that people will stop seeing dandelions as weeds but as the miraculous plants they are!

Now I had a cast of characters to use in each panel to link the Close illustrations together and attempt to bring to life the hustle and bustle of a busy market town over the centuries.

The historical facts could now wrap around these repeating elements. I really hope locals and visitors to Lanark enjoy the set of 12 drawings. Here is the first pre – drawing I made to bring the dogs to life.

I think we need to name Lanark’s two dogs!?

The original artwork is going on exhibition and is also for sale, including this first pre project drawing of the heraldic shield …